The Great Lockdown sustained world demand for table tennis equipment, with an increase in market share even for smaller exporting countries

In the last few weeks we have written about how the spread of Covid-19 has reshaped the consumer goods industry, often accelerating long-term trends that were already in place.
Certainly, the priorities of international consumers have shifted to essential needs, supporting demand for health, hygiene and cleanliness products and agri-food products, and penalising non-essential goods. At the same time, however, the significant increase in the average time spent indoors has accelerated the demand for particular categories of non-essential goods, such as consumer electronics or various indoor leisure products. In this general picture, the case of Ping pong equipment stands out.

World trade in Table Tennis Equipment has grown rapidly over the last two decades. A pronounced increase is particularly evident between the early 2000s and 2015; after this period, global flows of the product grew at a more moderate rate, stabilising at values close to USD 300 million. It is particularly interesting to note, however, that in recent years world trade in table tennis equipment showed an increase in the higher price brackets (High price bands), as shown in the graph below.

China dominates the ranking of the sector's main exporters, followed by Germany and France on the European front, and Japan on the Asian front. The latter exporter entirely focuses its production on the higher price brackets.

Booming global demand in the first 9 months of 2020

As anticipated, following the dynamic increases seen in the first part of the century, world trade in table tennis equipment has approached 2020 not in particularly brilliant shape, in terms of growth performance. In recent years, world exports of the product have been relatively stable, as the following graph shows (monthly percentage changes). 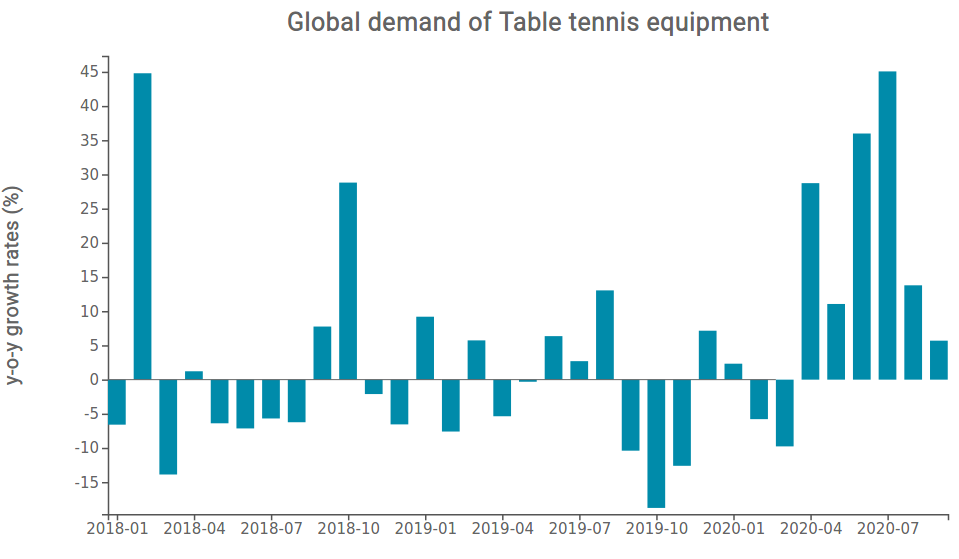 As the pandemic hit, during 2020 world exports of the product experienced a significant surge as early as April, with particularly positive performances also in the remaining part of the year. Overall, world flows of the product grew in double digits in the first nine months: +16% compared to the corresponding period in 2019.

A further evidence of the considerable increase in demand for Table tennis equipment is provided by the online searches data available in Google Trends, which show a significant increase in the interest of international users in "table" and "paddle" for tennis tables just at the beginning of the so-called Great Lockdown (see graph below).

The increases in demand were widespread and involved almost all countries in the world, as can be inferred from import data in the first 9 months of 2020. As you can see from the map below, European countries, especially Germany (+$5 million) and United Kingdom (+$2.5 million) showed particularly significant growth, but positive signals also came from e.g. the USA (+$4.4 million) and Australia (+$4.8 million). 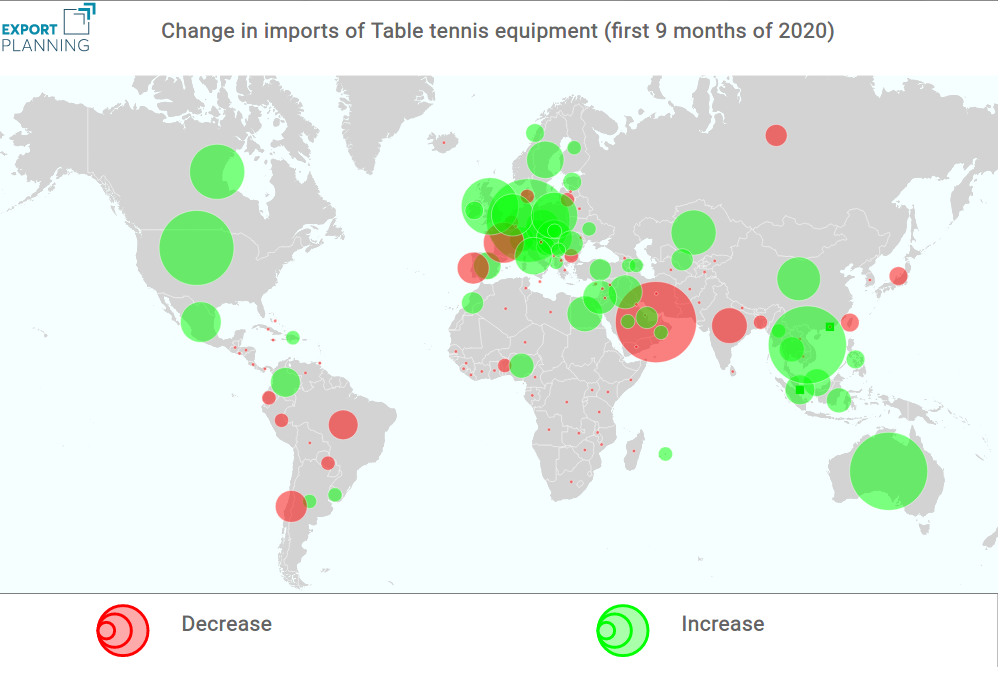 In contrast to other types of products, for the case of table tennis equipment it was not only China - the undisputed leading exporter - that significantly increased its market share and gained from the increased international demand. As a matter of fact, in the most recent quarters mainly minor competitor countries experienced an improvement in their competitive positioning. This group of countries include Italy, Spain and Portugal, which have not interrupted the growth trend of recent years. 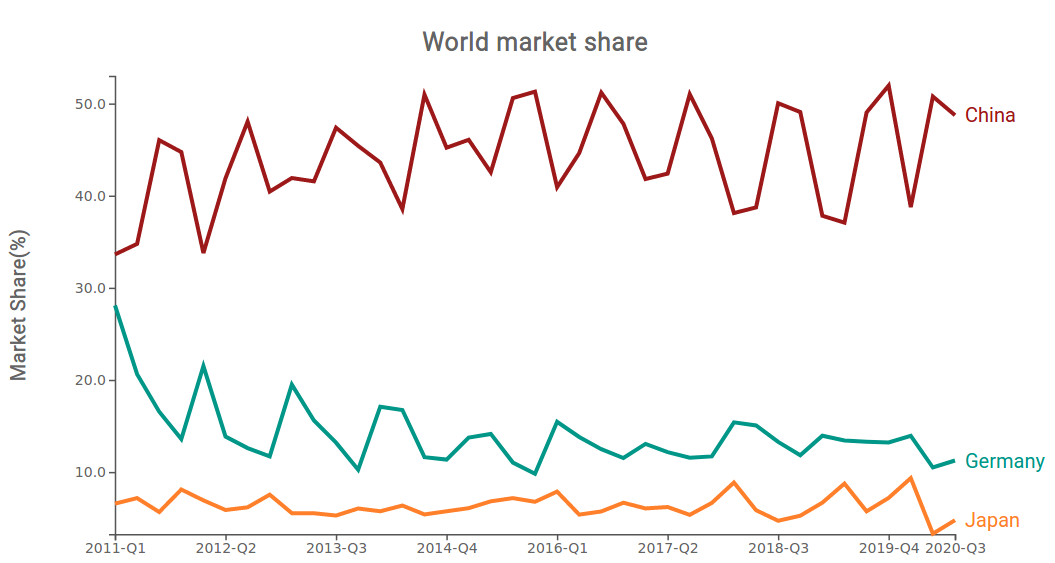 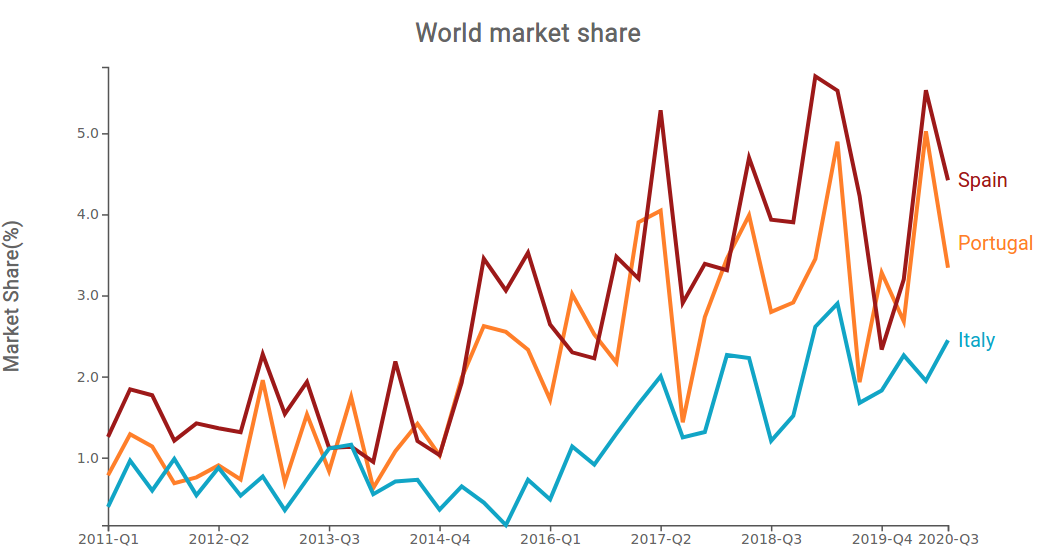 As already highlighted for small household appliances, the case of table tennis equipment shows how new consumer dynamics intercept market segments that are still highly contestable. On the other hand, it also certifies how international trade data can be a valid ally in interpreting the current transformations in purchasing behaviour, thanks to the economies of scale and lower sunk costs compared to market surveys.