On the British currency front, mixed signals continue to arrive: while on the one hand the British economy has given excellent signs of recovery, on the other hand there are still elements of uncertainty that could lead to a weakening of the British pound.
After the strengthening phase experienced in the first quarter of 2021, going from 0.91 GBP per EUR to 0.86, the British currency seems to have found its balance. Despite the stability that characterized the currency between April and June, forex market sentiment continues to be uncertain and poised between optimism and uncertainty. 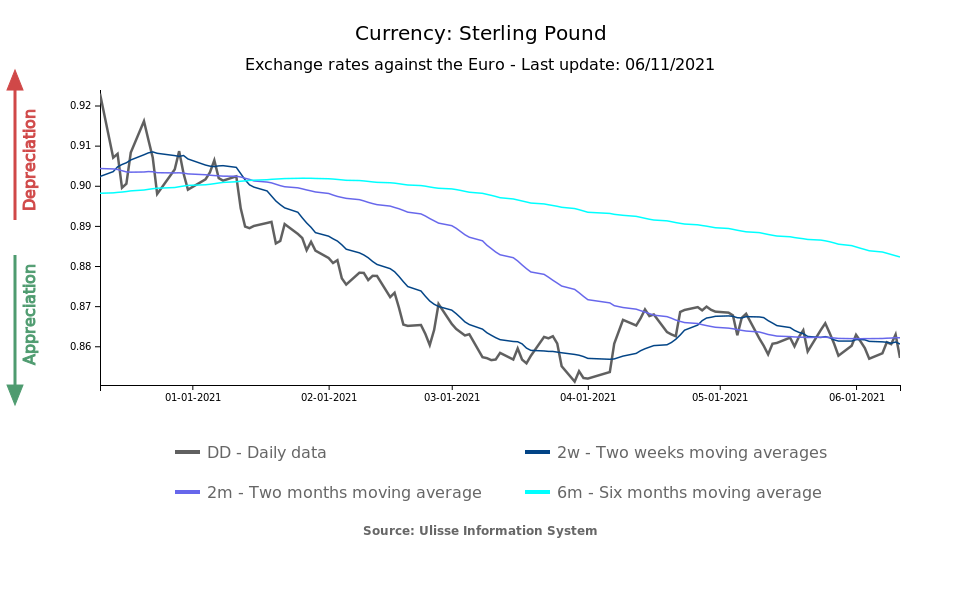 In particular, in the last few days the United Kingdom is back in the spotlight because of the rise in Covid-19 infections caused by the spread of the new Indian variant (renamed "Delta"). In June, the level of daily new cases exceeded 5000 while 7000 were the new confirmed cases on Thursday, June 9, as seen in the chart below.

Although the numbers are not yet alarming and far from the January spike, the British government is considering postponing the date of the full reopening scheduled for June 21 ("Freedom Day"), in case this increase is accompanied by an increase in hospitalizations. In the short term, the discussion about reopening could weigh on the performance of the British currency.
So, if on the one hand the management of the vaccination plan has been successful, with more than 60% of the population having received at least the first dose of vaccine and a gradual return to normality earlier than in the countries of the European bloc, on the other hand the spread of mutations resistant to the first doses of vaccine is generating many concerns.

Shadows on the British currency

In addition to the management of the vaccine plan there are additional factors casting shadows on the performance of the pound.

UK-EU trade war The fear of a trade war between the UK and EU is once again hovering in the air, keeping international observers on high alert. In the past few days, relations between the UK and the European Union have further soured with threats of sanctions and tariffs from the latter. In this new round, the subject of debate was the failure to agree on the implementation of trade rules in Northern Ireland, which remained in the European common market to avoid the rebuilding of a physical barrier with Ireland and safeguard the Good Friday agreements. The dispute has been goliardically dubbed the "sausage war" by British newspapers, as it concerns trade in chilled meats from Great Britain to Northern Ireland. At the moment it is still uncertain how this dispute will end, however past experience has repeatedly taught us that the British pound tends to depreciate when anxieties about Brexit increase.

Inflationary fears. As it is happening in several Western countries, also in the UK there is a risk of inflation, due to the strong increase in the cost of raw materials and the massive injection of liquidity in recent months. Between April 2020 and April 2021, the CPI index rose by 1.6%, approaching the 2% target. According to experts, the hypothesis of an increase in the reference interest rate, which is currently low at 0.1%, is becoming more and more concrete.

The Office for National Statistics (ONS) reports that in the first three months of 2021, the unemployment rate declined from 5.1% in Q4-2020 to 4.8% in Q1-2021. Despite the total lookdown, UK businesses have started hiring again spreading greater confidence among consumers as well.
Furthermore, according to the April macroeconomic scenario of the IMF (International Monetary Fund), the trend growth rate of British GDP is expected to increase by 5.2%, while Goldman Sachs' estimates are even more optimistic predicting a growth of +7.8%, surpassing the United States whose recovery is expected by 7.2 percentage points.

Turning the analysis around, the overall outlook for the UK is uncertain with several shady areas and some bright spots. If, on the one hand, various factors are emerging that in the long term could create a climate of mistrust towards the pound, on the other hand, it is necessary to point out the excellent economic results achieved by the United Kingdom.