Last week, international observers were focused on the highly anticipated annual symposium held by the Federal Reserve in Jackson Hole, linked to the decision of the American central bank on the reduction of securities purchases1. Despite last week's rumors pointing on an imminent announcement of tapering, the US central bank decided to take more time.
In a speech on Friday, August 27, Fed Governor Jerome Powell announced that the institute is open to a reduction of monetary stimulus by 2021, without giving a precise date of the start. Powell also pointed out that there is no link between the reduction of monetary stimulus and the increase in interest rates, which could remain low for a long time yet: the timing and pace of the coming reduction in asset purchases will not be intended to carry a direct signal regarding the timing of interest rate liftoff"2.

So, let us delve into the reasons why the Fed is maintaining, at least for the time being, an accommodative monetary policy.

As can be seen from DailyDataLab, since mid-July in the United States the downward trend of new confirmed cases has stopped, reaching over 300 thousand daily cases in August.

According to the authorities, given the high contagiousness of the Delta variant, the increase in cases occurs almost entirely among people who have not yet been vaccinated, so much so as to speak of "pandemic of the unvaccinated". US President Joe Biden appealed to Americans to get vaccinated, for those who have not yet done so; at the same time, political pressure is growing on federal states with low vaccination rates. Although the pandemic is certainly a threat to the country's economic growth, Powell pointed out that, with the spread of vaccines, the Delta variant only represents "a short-term risk".

One of the themes on which Powell focused during his latest speech concerned employment data, given the central bank's dual role of regulating prices and stimulating full employment. While the outlook for the labor market has improved considerably in recent months (with the unemployment rate falling to 5.4%, a post-pandemic low point), long-term unemployment still remains high. In August, moreover, the rate of hiring showed a sharp slowdown, highlighting the persistence of several gray areas in the US economy's recovery.

As can be seen from the chart below, which shows the exchange rate of the dollar against the euro, the bullish momentum experienced in summer seems to have momentarily stopped for the greenback, which reached its highest level in nine months on August 20. Doubts that have begun to emerge as to when the Federal Reserve will start reducing its stimulus have caused the greenback to lose about 1.7% against the euro. 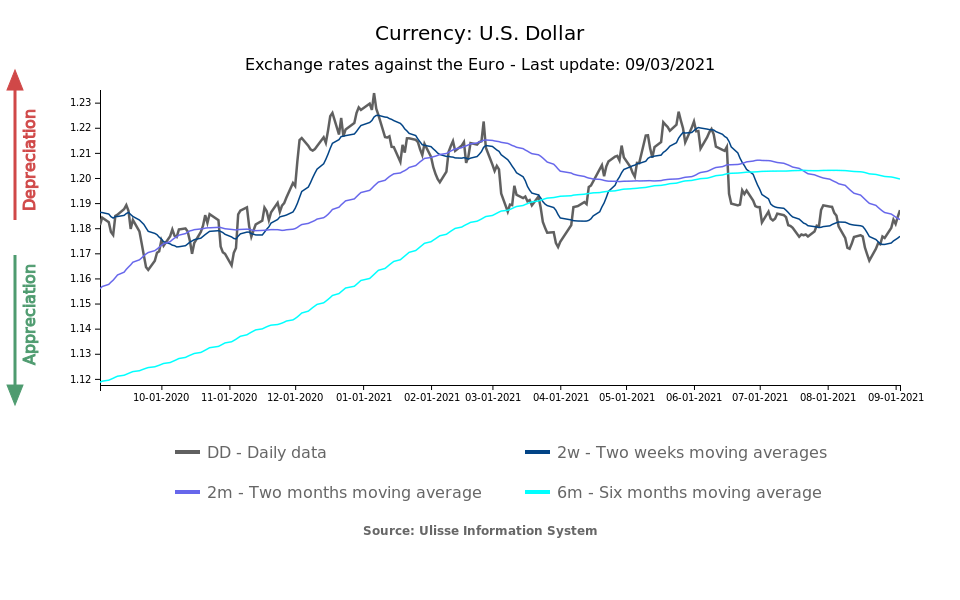 On the contrary, the US stock exchanges reacted to Powell's words with a surge, pushing the main US indices to new record levels: in a single week, the Nasdaq index marked a 2% increase, as well as the S&P 500 (+1.4%), while the performance of the Dow Jones was more contained (+0.7%).

To sum up, the line chosen by the Fed points to a prudent stabilization of monetary policy, given the climate of uncertainty in the economy that the proliferation of the Delta variant is currently fueling. In this context, a premature restrictive intervention could in fact prove to be very damaging for the US economy. According to various analysts, however, the date of the long-awaited tapering remains close, probably in October. The Fed's change of course is a good news also for the Eurozone countries, with the ECB still far from tightening its monetary policy.