It is well known that there are "free" markets where securities and currencies are traded in parallel with official markets. More properly, we can speak of a third market if the unregulated exchanges involve securities while, in the case in which currencies are traded, we can speak of a black market.
There are several factors common among countries where black market transactions are operating and proliferating, such as:

A case that we have dealt with several times in recent months is that of the Lebanese Lira1, whose value on the black market has dramatically collapsed following the default declared in March 2020, while, on regulated markets, the currency remains pegged to the dollar.
In this week's currency focus, we will focus on the case of another country that has been torn apart by the crisis for years now: Argentina. In this context, the dynamics of the exchange rate against the dollar on unregulated markets becomes a relevant indicator to fully understand the economic crisis in which the country is involved.

A country in the grip of the economic crisis

Argentina holds the sad record of being one of the countries with the highest number of sovereign debt defaults, the first of which dates back to the first half of the nineteenth century.
In May 2020, the country faced the ninth economic meltdown in its history - the second in less than two decades - after the current government headed by Alberto Fernández failed to renegotiate an agreement with bondholders who own the country's debt.

As recounted on several occasions2, Argentina's current crisis began in 2013, under the presidency of Cristina de Kirchner, due to a sharp deterioration in the current account that sent the country into an inflationary spiral.
With a promise to succeed in restoring the country's economy between 2015 and 2019, the presidency passed to center-right candidate Mauricio Macri. Despite a more austerity-focused policy, the premier was unable to contain galloping inflation, which topped 50% year-over-year in February 2019, setting the stage for the return of Peronism. 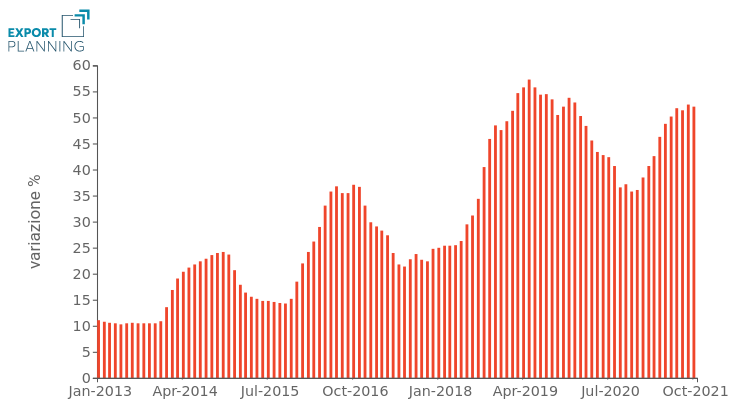 The spread of the pandemic exacerbated the reality over which the country has been dragging its feet for decades. In addition, inflation remains a constant concern for financial authorities: the rate surged back above 50 percent year-on-year in September. Given the turbulent environment, local newspapers report that the executive has issued a measure fixing the prices of more than 1,400 products until January, in order to avoid a further weakening of the population's purchasing power.

The dynamics of the currency

As mentioned in the introduction of the article, the difficulties that the country is currently facing are reflected in the currency trend and, in particular, in the spread created between the official exchange rate against the dollar and the rate traded on the black market (also called "Dólar Blue").

In Argentina, the black market developed after President Kirchner and his administration placed the first restrictions on the purchase of dollars in 2011. After winning the elections, one of Mauricio Macri's first moves was to regularize the flow of currency so as to curb the spread of transactions on unregulated circuits.
Although for several years they managed to normalize the currency situation, nullifying the gap between the value of the peso on the black market and on regulated markets, rampant capital flight and the collapse of foreign exchange reserves led the authorities to reinstate currency controls in September 2019. 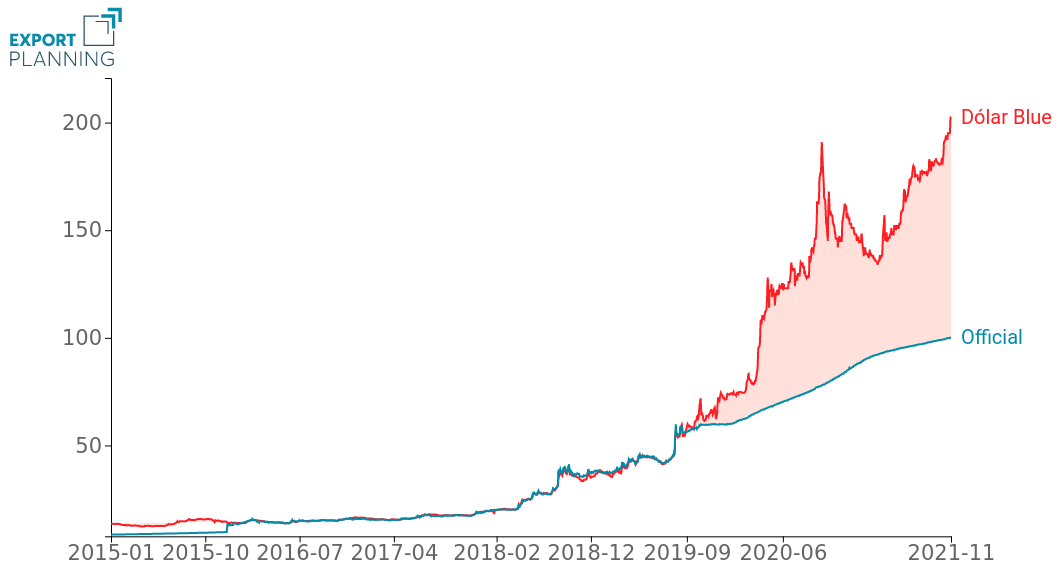 Since then, the divergence between the Dólar Blue and the official exchange rate has become increasingly evident, especially after even tighter currency controls were put in place in December 2019, with the transfer of power to the Peronist government of Fernadez. Actually, while on official circuits the Argentine currency exchange rate is around 100 peso per dollar, on the black market the peso is in free fall and about 100% higher than the official exchange rate.
According to analysts, the Government is trying to keep the official exchange rate artificially stable in view of the mid-term elections that will be held on Sunday, November 14. Moreover, the executive's will seems to aim to avoid further shocks to an already suffering economy, considering that, even on the official markets, since the beginning of the health crisis the currency has depreciated by 67%.

1. For an in-depth look at this theme, we suggest: "Lebanon kneeling: what prospects for the country and the Lira?" (July 2021), "Lebanese Pound in Free Fall" (March 2021).
2. Our previous articles on the topic: " Exchange Rates: August Wrap-up" (August 2020), “Argentina is Still in the Grip of the Crisis, while Turkey shows Signs of Improvement” (October 2019), “New Developments in Argentina Crisis and Brexit Maze” (September 2019), “Dollar dominates currency markets, while Argentine peso sinks” (August 2019) .