On the occasion of the opening of EIMA, some case studies for the Agricultural Machinery segment

The update on ExportPlanning of the Ulysses annual database, containing the prestimate of international trade values for 2022, allows us to take a look at the current year's pre-consensus, with a sectoral focus as well. In particular, in this article we will consider the case of Agricultural Machinery.
Indeed, the sector, even in the face of the economic difficulties that are characterizing the Means of Transport segment, has shown itself to be a particularly resilient supply chain to the recent Covid crisis.

The graph below shows the historical series of world trade in Agricultural Machinery: it is evident how, despite the brief setback in the pandemic year, which was, moreover, contained when compared to the double-digit falls recorded by the aggregate to which it belongs, the segment's growth has extremely accelerated in the last two years. Between 2021 and 2022, the segment has, in fact, shown an average annual growth rate of 23 percentage points in euros, culminating in a value that has exceeded 95 billion euros (Fig. 1). 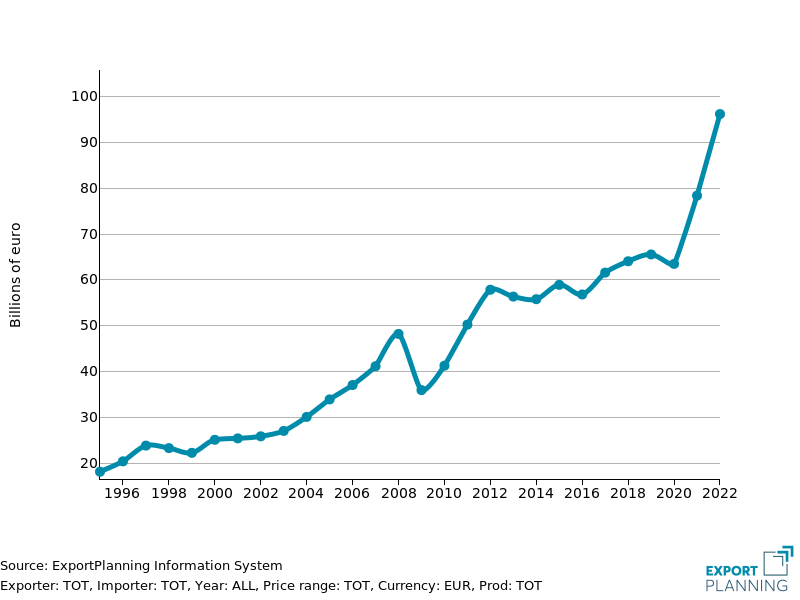 However, in a downward socio-economic environment in which uncertainty prevails in the face of the Russian-Ukrainian conflict, inflationary pressures and the resulting restrictive policies by central banks, it is extremely important to identify those markets in which a phase of "structural" acceleration in demand for the industry is underway. In the current conjuncture, it is indeed natural to expect a geography of opportunities that is also highly differentiated from region to region. The present analysis aims to identify some cases of the most attractive markets, that is, those countries that, due to medium- to long-term phenomena, are experiencing a phase of strong growth in demand for Agricultural Machinery.

The tractor sector is the most important within the Agricultural Machinery family, covering about 30 percent of sector exports.
Using Machine Learning techniques developed by StudiaBo as part of the ExportPlanning Information System, an indicator was developed that (based on several factors including the rate of change in imports, GDP and the country's population) identifies markets that are experiencing "structural" acceleration.
Some particularly significant examples are shown in the following graphs of the Polish and Hungarian markets. 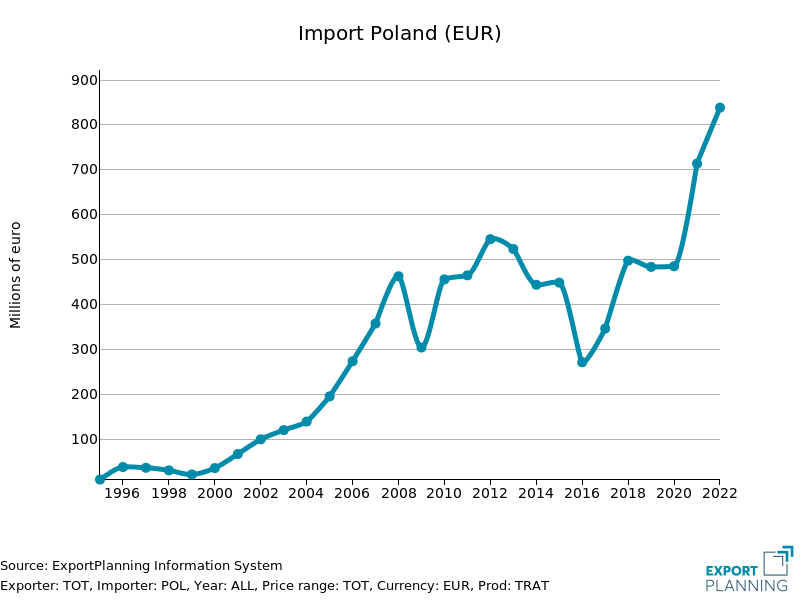 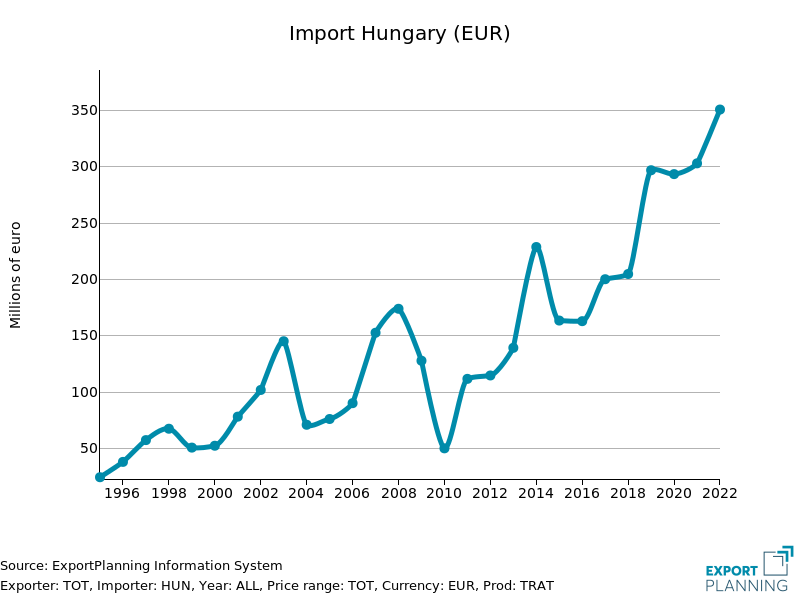 Both markets showed fluctuating dynamics of tractor imports until 2016; however, in more recent years, a strong growth phase took over, which was able to cancel out even the negative effects of the global pandemic, keeping values stable. In 2021-2022, the bullish phase continued, setting record values, and it is expected to continue in the coming years.
Indeed, over the past few years, both countries have benefited from economic and social cohesion policies, with allocations from the European Union to the agricultural sector, which have strongly supported the mechanization of the supply chain. ExportPlanning estimates present a picture of opportunities for the near future as well, in the face of increasing automation of the supply chain.

The second most important segment within Agricultural Machinery is harvesting machines. These moved a turnover of more than 20 billion in 2021, and further growth of 5 percent is also estimated for 2022. Again, Eastern Europe provides significant room for growth, but there is no shortage of more "distant" geographies such as Ghana and Australia, which show very favorable growth dynamics, as shown in the figures below. 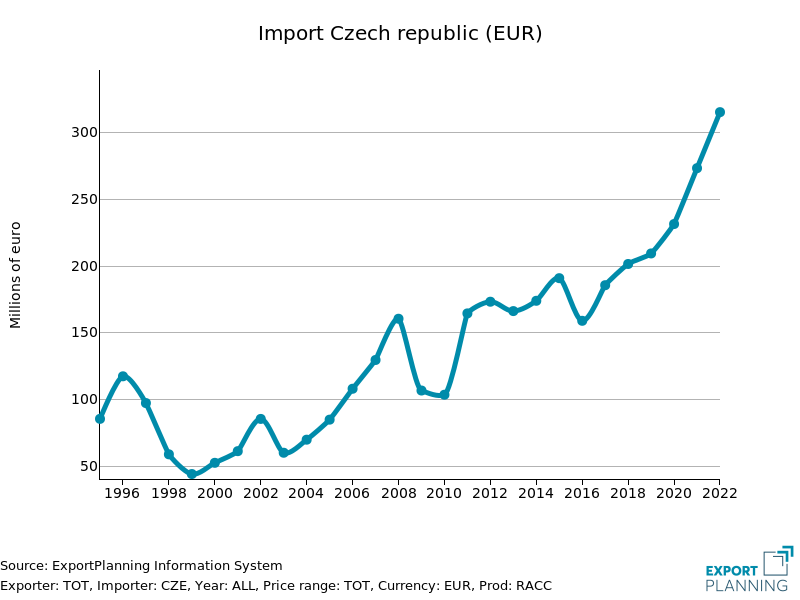 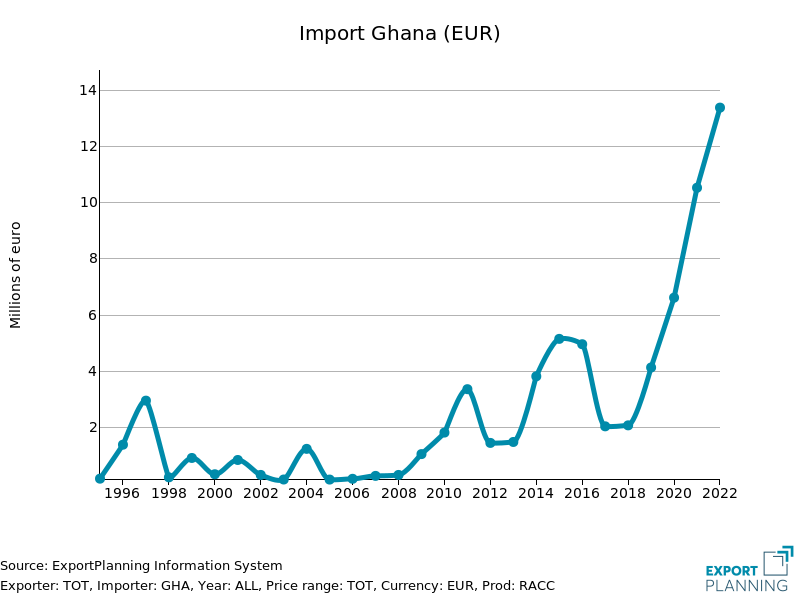 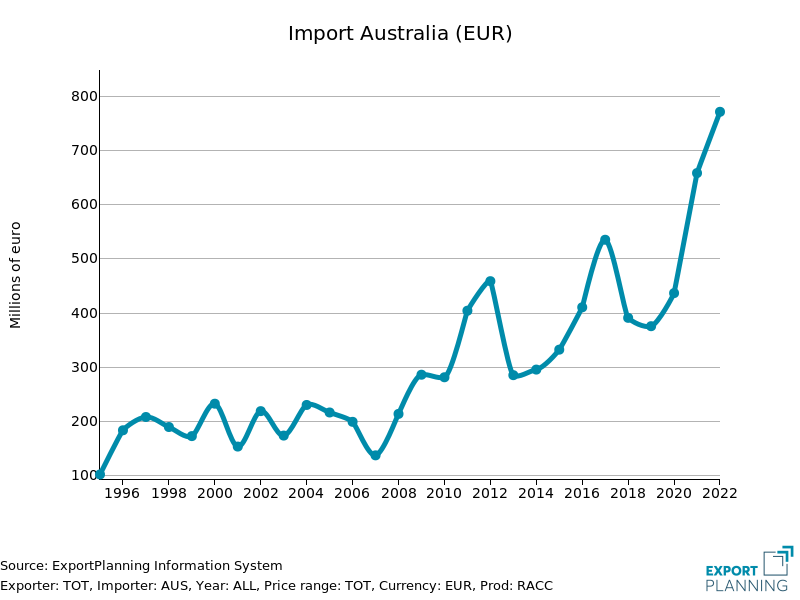 Despite the great heterogeneity of the target markets considered, they all share import values that have increased significantly in recent years.
Ghana's historical trend was roughly stable until 2018, but within 4 years it went from a value of 2 million euros to over 13, supported by government objectives to modernize the local agricultural sector, especially in the north of the country. The European Union itself has announced funding and cooperation programs for the development of the industry.
The Czech Republic and Australia, on the other hand, after many years of substantial stability, have developed their imports in the most recent period, becoming increasingly attractive to exporters in the industry.

The edition of EIMA (Nov. 9-13 in Bologna) opens with interesting international results, albeit against a backdrop of great uncertainty. Identifying the right geographies in which to focus one's business efforts therefore appears even more relevant.
In particular, in the European markets analyzed here (Poland, Hungary and the Czech Republic) there is ample room for improvement for Made in Italy exporters, as in 2022 the Italian market share averaged 7%-10%. Results that appear inferior to those of the main European competitors, first and foremost Germany, the absolute ruler of the Agricultural Machinery sector within the European Union.
For the markets of Ghana and Australia, the growth margins for Italian exports are even greater, considering that Italy has little presence in these markets, with a market share of no more than 3 percent.

In light of what has been said, we can say that knowing the stage of development of a country's imports is key to understanding whether to position oneself in that market or prefer other destinations. This is particularly true for Italian agricultural mechanization SMEs, which aim to increase their competitive positioning and are characterized by an export share of 70 percent of domestic production, confirming the sector's very high international vocation.