The world economy did not experience the expected decline in Q1-2019. However, Trump's trade war is not over.

During the second half of 2018 all economic analysts agreed that Trump trade war, the anti-diesel vehicles measures, and the Brexit uncertainty would lead to a sharp slowdown in the world economy. The year-end economic indicators signaled, as imminent, the phase of greatest slowdown, and perhaps the fall of the world economy. The expectations for the first quarter of 2019 were therefore marked by a strong pessimism. The data relating to the GDP trend in the first quarter of 2019 in the main economies of the world (United States, China and EU), on the other hand, reported an economic growth that was higher than expected. Even Italy, with a + 0.2%, surprised many analysts that, after the last two negative quarters of 2018, feared a continuation of the current recession.

The data published this week by StudiaBo on world trade in the first quarter of 2019, confirm the resilience of the world economy.

However, the analysis of the actual dynamics of foreign trade is not immediate and requires triangulation techniques. The difficulties derive from the fact that the different trade flows must be combined together, in order to obtain an overall view. The obtained aggregation requires the various flows to be expressed in a unique unit of measurement, which can generally be:

Each unit of measure has its strengths and weaknesses.

This article analyzes the results obtained with the various measures, providing a summary evaluation in the conclusions. 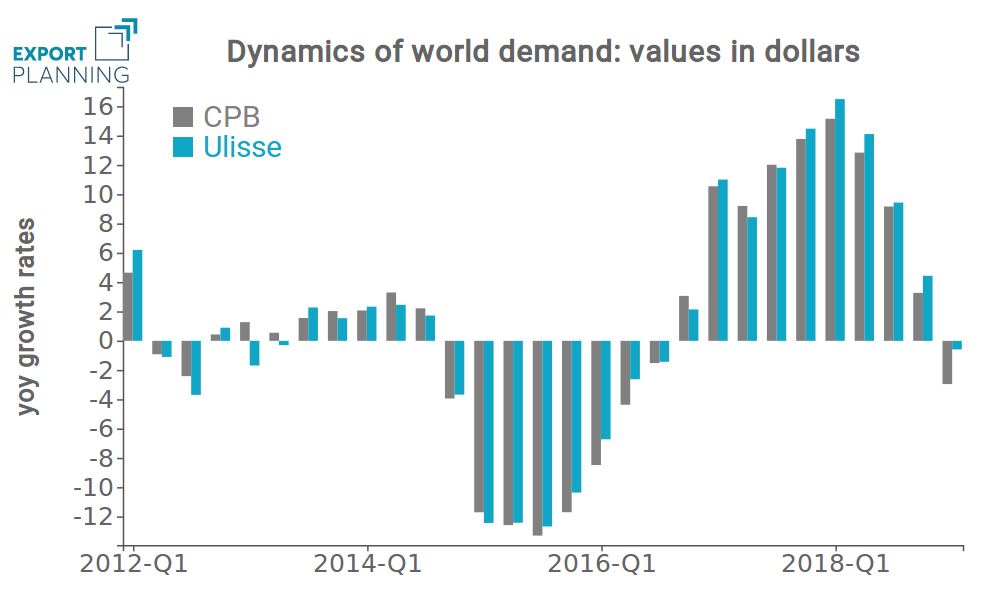 Both series report a sharp slowdown in world trade and the loss of growth in the first part of this year.

The weakness of the dollar measure is that the results depend heavily on the dynamics of exchange rates. For example, let us consider the flow of exports from Italy to Germany. Many of these flows are the result of contracts whose prices are stable. Given the same quantity delivered, this flow in euro does not change between one period and another. Conversely, once translated into dollars, in order to aggregate them with flows from other parts of the world, they increase if the dollar has depreciated against the euro and, vice versa, if the dollar has appreciated.
When the dollar exchange rate changes significantly, as happened, for example, between the end of 2014 and the beginning of 2016, the measure of flows at current prices in dollars can provide strongly distorted indications with respect to real economic facts. Also in the course of 2018 and the first part of 2019 the exchange rate of the dollar registered significant changes.

The strength of measuring world trade in euros is to provide a benchmark for companies that measure their revenues and costs in euros.
The weaknesses are the same described for the measurement in dollars.

The following graph compares the trend in world trade expressed alternatively in euros and dollars. 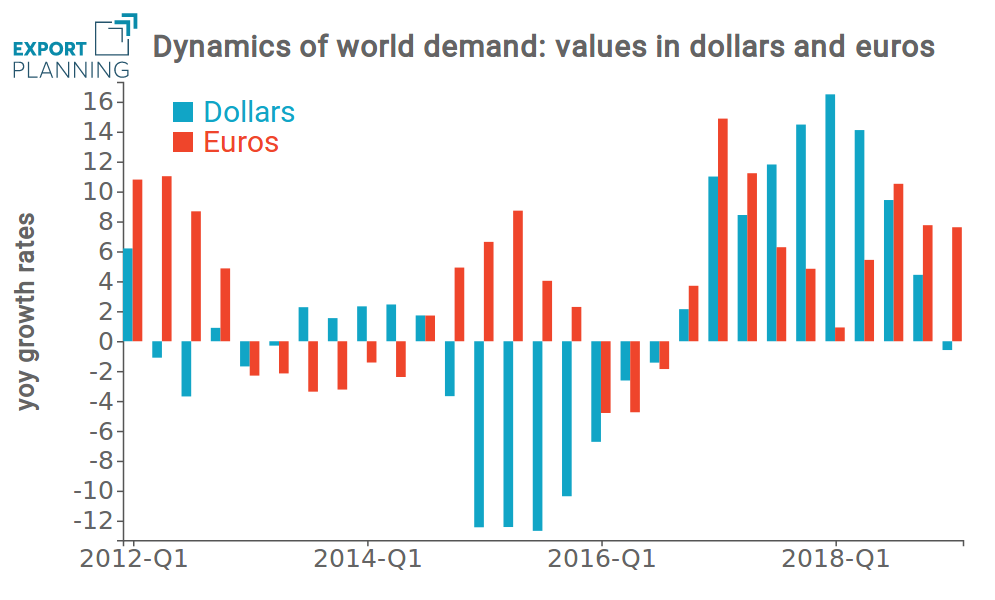 Being able to measure the volume of trade, net of price and exchange rate changes, is the strenght of measuring foreign trade flows at constant prices.
The weakness is the need for a series of "net of quality"1 prices. This makes the calculation of this measure complex.
CPB deflates foreign trade flows only at the country level. This approach makes the calculation of prices relatively easy, but prevents the analysis of foreign trade at Product level.
StudiaBo has developed a methodology to deflate product level flows. This can lead to different results at the aggregate level, but allows us to investigate the dynamics of world trade with drill down at Industry/Sector/Product level.

The graph below shows the quarterly trend in world trade declared by importing countries, calculated both by CPB (the first quarter is given by the average of January and February) and StudiaBo.
The differences are marginal and largely justified by the two different methodologies. 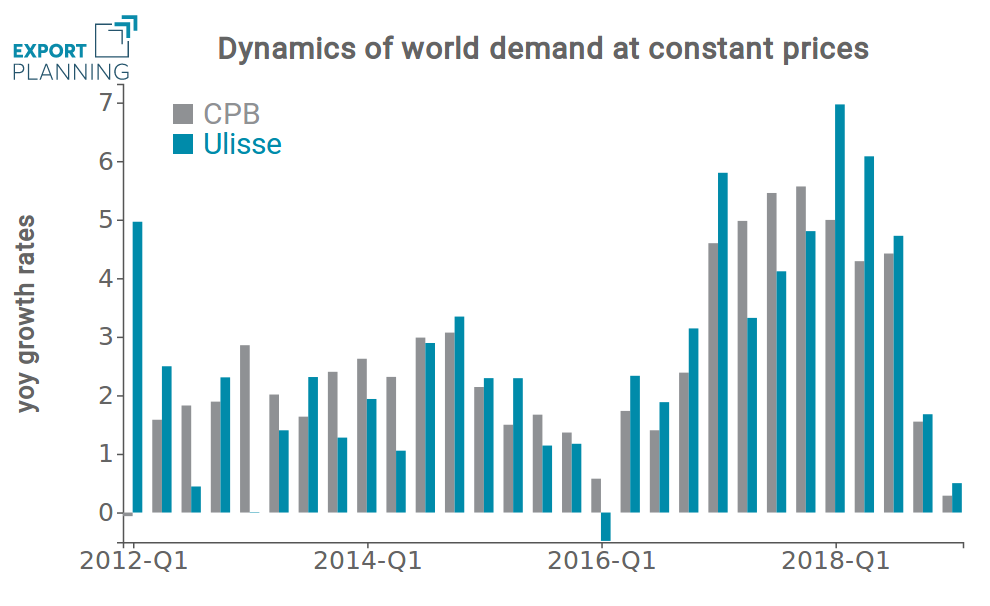 The analysis of these data highlights the strong development of world trade between the beginning of 2017 and the first half of 2018. Without any doubt in recent months, the growth of trade between the different countries has experienced a deceleration, without however going, at least in the first quarter of 2019, in negative territory.

The different measures of world trade contribute to signaling a phase of net slowdown in world trade. Unlike what was feared, however, the current slowdown has not yet translated into a fall in world demand. Prudence, in this case, is a must, given the unpredictability of the American administration in the management of the commercial war started against the partner countries. Only the next few weeks/months will tell us how much Trump is willing to risk isolation in order to rebalance the US trade deficit outside the WTO procedures.

1) The prices use to deflate values must be net of quality to be able to isolate the effects due only to the variation of the prices of the factors of production.