The unexpected appreciation of the Egyptian pound

After having fluctuated for over two years at around 18 pounds per dollar, from February of this year the Egyptian Pound has embarked on a path of progressive appreciation that has recently led it to fall below the level of 16.4. 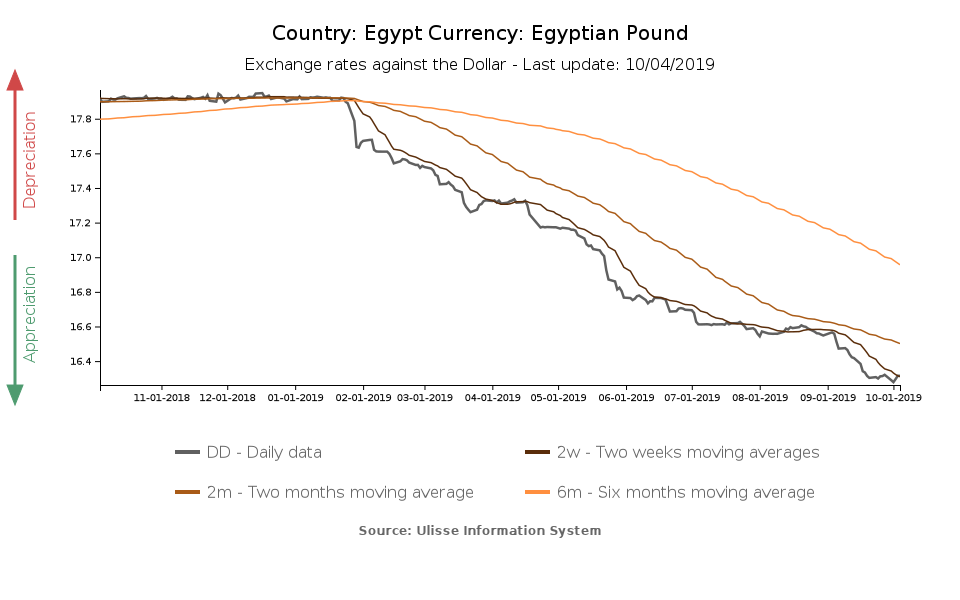 In terms of effective exchange rate (weighted for trade in goods with the major partner countries), this year, the appreciation of the Pound is over 15%.

Egypt has gone through a dramatic two-year period of devaluations (2015-2016) in which the lira, starting from 7 lire per dollar, saw the Central Bank change progressively, and slowly, the exchange parity, in an attempt to contain the exits of capital. Without success. Only the collapse above 18 pounds per dollar and the intervention of the International Monetary Fund made it possible to block the hemorrhaging of capital, allowing a progressive recovery of international currency reserves.

The stabilization of the exchange rate at 18 pounds per dollar had already led to a significant appreciation of the Pound in 2018 in terms of effective exchange rates (see Egyptian pound: a year of recovery ). It had also recreated the conditions for a continuation of the phase of significant economic development that characterized Egypt after the Arab Spring. From the point of minimum growth in 2011 (+ 1.8%), Egypt has registered growth rates progressively higher, up to over 5% in 2018. At the same time unemployment decreased from 13.4% in 2014 to below 10%, estimated for this year. Above all, inflation has fallen from 24 of 2017 to the current 7.5%. If we consider that in the forecast scenario of April 2019, the International Monetary Fund predicted that inflation in Egypt would have fallen below 10% only in 2021, the strong progress registered by the Egyptian economy this year is clear.

The strong and unexpected reduction in the rate of inflation, associated with the progressive reduction of US interest rates, and greater freedom in capital movements, are at the basis of the unexpected and strong appreciation of the lira in 2019, not only versus the currencies of the partners but also versus the dollar. The Egyptian central bank, while pursuing a rate reduction policy, followed prudential criteria, causing real interest rates to almost 10%. Also last week, the rate reduction was "contained" at 100 basis points, against market expectations of a reduction of 150 points. The Bank's motivations are to be found in fears that movements that are too abrupt may reverse the flow of capital, bringing the country back to the 2015-2016 situation.

Thanks to a policy of the Central Bank determined to reduce inflation and to a increase in reserves, replenished by funding from the International Monetary Fund and aid from the Gulf countries, the greater freedom in capital flows this year has created a virtuous circle between inflation and the exchange rate, which led Egypt to reach the target of inflation control below two digits two years in advance.