Last year's crisis, caused by the spread of the Sars-Cov-2 epidemic, dealt a severe blow to the world economy. However, the recovery seen in the second half of the year was quite rapid, far exceeding expectations, which until a few months ago had been dented by strong global uncertainty.
In the most acute phase of the health emergency, the European Union itself, together with the United States, was the epidemic centre of the West. The outbreak of Covid-19 proved to be a stress test for the resilience of the EU, which, through a rapid and solid economic policy reaction, showed itself to be more cohesive than ever.
In this context, and with a particular focus on the performance of European exports, a comparison with the Great Recession (2008-2009) is useful in order to highlight the differences between the two major economic crises of the 21st century.
The following graph shows the monthly trends of the two recessions.
The graph below shows the monthly evolution of European exports. In order to better compare the two series, they have been taken as an index, set equal to 100 in the month before the start of the two crises, October 2008 and January 2020 respectively.

First of all, a graphical comparison shows the differences between the two series in terms of the intensity of the fall following the crisis and in terms of the persistence of the recessionary effects.
During the Great Recession, the fall in European exports was progressive until the fourth month (January 2009), except for the eleventh month (August 2009), for which the further contraction was mainly due to seasonal closures. Moreover, the downward trend proved to be particularly long-lasting, with European export levels remaining 20-30% below pre-crisis levels for all subsequent months. The achievement of the standards prior to the Lehman Brothers bankruptcy occurred only about 2 years after the start of the crisis.
The Great Lockdown, on the other hand, was characterised by a profoundly different dynamic. Until the third month, EU exports were not particularly affected by the spread of the epidemic (due to still limited transmission), while the fourth month, April 2020, saw a dramatic fall of about 30 percentage points from initial levels, corresponding to the first great generalized lockdown. However, after that, a major recovery began, bringing the Old World back to pre-crisis export levels by the ninth month (September 2020). Despite a slight decline in the first two months of this year, new data updated to March 2021 show that European exports are experiencing a significant growth phase.

A further step in the study of the two crises is to observe the behaviour of the main European competitors. The following graphs, carried out with the same methodology as above, show a comparison of the main EU exporters. This analysis is particularly important as it allows us to highlight the countries that recovered fastest, those that struggled most and to make comparisons on a country-by-country basis. 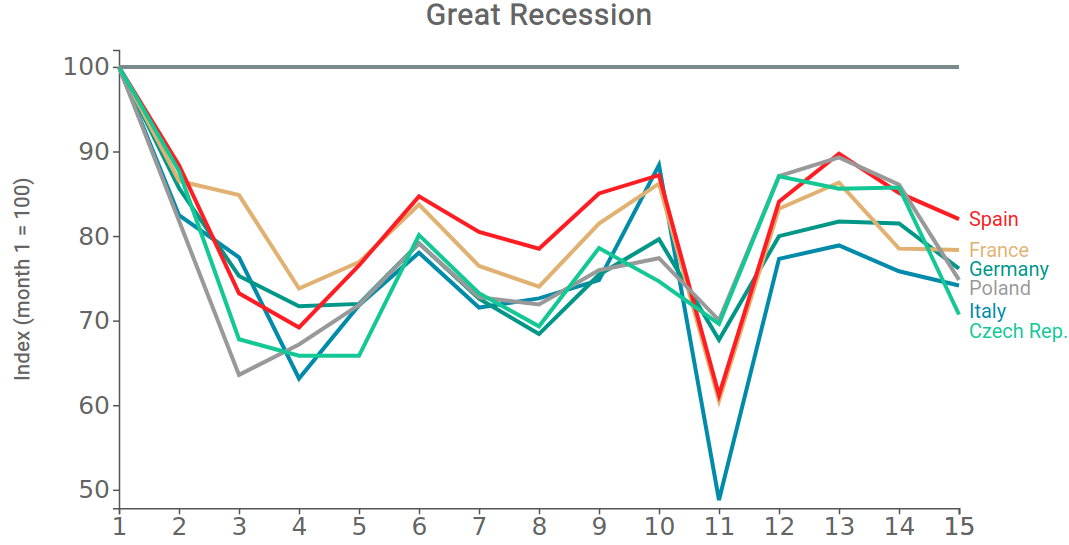 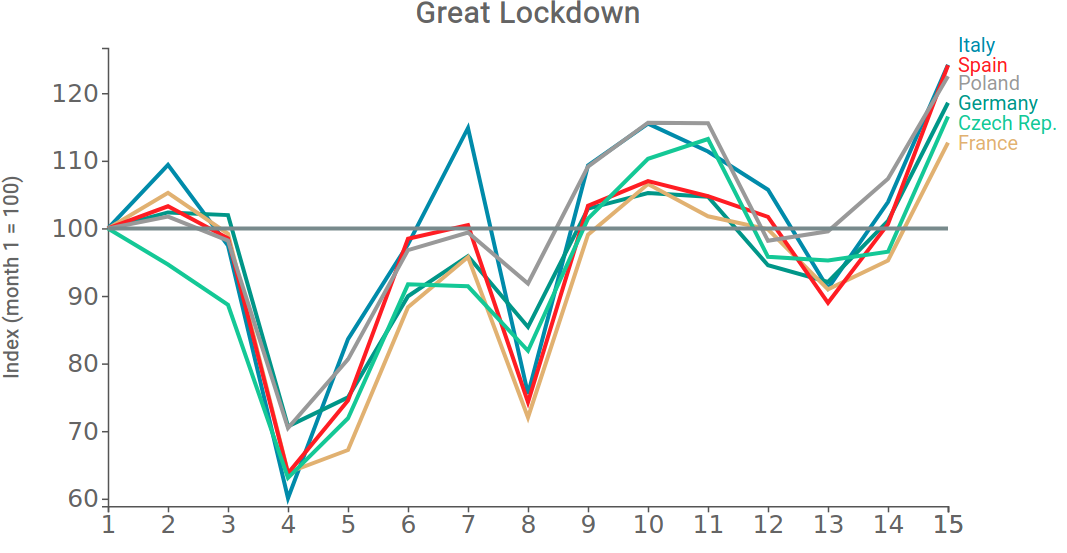 During the Great Recession, it was Italy, Poland and the Czech Republic that experienced the steepest declines from the outset, while France, and later Spain and Germany, managed to limit the fall partially. In the following periods, all the main Member States followed a strongly persistent downward trend, which, especially for Italy, intensified further in the eleventh month, leading to an export contraction of more than 50%. Finally, it can be seen that, for much of the period under review, Eastern European countries struggled more than Western European countries, with the exception of Italy, which was more in line with the Eastern European cluster.

During the Great Lockdown, by contrast, the greatest difficulties were concentrated in Western Europe for much of the period. In particular, Italy, France and Spain were the countries most affected by the April 2020 slump, due to the spread of the health emergency, which initially saw the countries of south-western Europe as protagonists. Germany, on the other hand, as in 2008, initially managed to stem the collapse. The Czech Republic and Poland, after the loss in April that only the latter managed to contain, showed a more rapid recovery (bucking the trend of the previous crisis), managing to position themselves since the summer months above the January 2020 standards, surpassing most Western European countries. Once again, Italy shows a similar trend to the Eastern European countries, characterised by an initial negative peak, which was followed by a particularly intense relaunch phase.

In light of what has been observed, we can say that the economic recovery following the Great Recession and the Great Lockdown has been profoundly different. While for the first crisis the fall was gradual and lasting, for the second there was a negative peak in April 2020, followed by a gradual recovery that allowed EU exports to quickly return to pre-pandemic levels. However, in geographic terms, the speed of recovery was not the same for different member states.
The rapid recovery testifies to the recovery of the European manufacturing industry, which has progressively adapted to the "new normal" and, subsequently, to the increasing diffusion and availability of vaccines.
In the coming months, it will be important for all EU countries to catch up with this phase of trade development so that we can look to the future with increasing optimism.