According to the IMF, Asia and Africa will show the fastest economic growth, while Germany and Italy will lag behind the rest of the EU.

At the beginning of April, the International Monetary Fund released the latest edition of the World Economic Outlook (WEO). The IMF analysis shows that global expansion is weakening: global growth is expected to reach 3.3% in 2019, compared to 3.6% in 2018.
The economy could grow faster than expected if trade tensions were resolved quickly: this could improve business confidence and investor sentiment. Nevertheless, risks remain on the downside: an escalation of the US-China trade war, and the consequent increase in uncertainty, could jeopardize economic growth.
Other elements that could worsen the current outlook are the possibility of a no-deal Brexit, “persistently weak economic data pointing to a protracted global growth slowdown” and prolonged uncertainty in Italy, which is reflected in high sovereign bonds yields.

Global economy: who is experiencing the fastest growth?

One of the variables included in the WEO is GDP growth at constant prices. The analysis of the latest forecasts for the current year highlights which countries are expected to show the best (and worst) growth performances.

As you can see from the map chart, the areas that will show the fastest growth in 2019 are South Asia, countries bordering South China Sea, East and West Africa.
Among Asian countries, we can find India and Bangladesh in the lead (their GDP growth rates will exceed 7%), followed by Vietnam, the Philippines and China, whose rates will exceed 6%. GDP will grow by slightly more than 5% in Indonesia, instead.
Among African best performers, we can find Ethiopia (+7.7%) in East Africa and Ghana (+8.8%) in West Africa. Ethiopia’s economic growth is supported by significant foreign direct investment inflows, as well as by its agricultural potential and natural resources. In 2017 Ethiopia welcomed FDI inflows amounting to 3.5 billion dollars and ranked as 2nd largest FDI beneficiary in Africa.
Ghana is a major FDI recipient, as well (4th largest African recipient in 2017). Another driver of Ghana’s economic growth is institutional quality: the country made significant steps towards democracy in the last two decades and ranks among the first African countries for freedom of speech and press freedom. 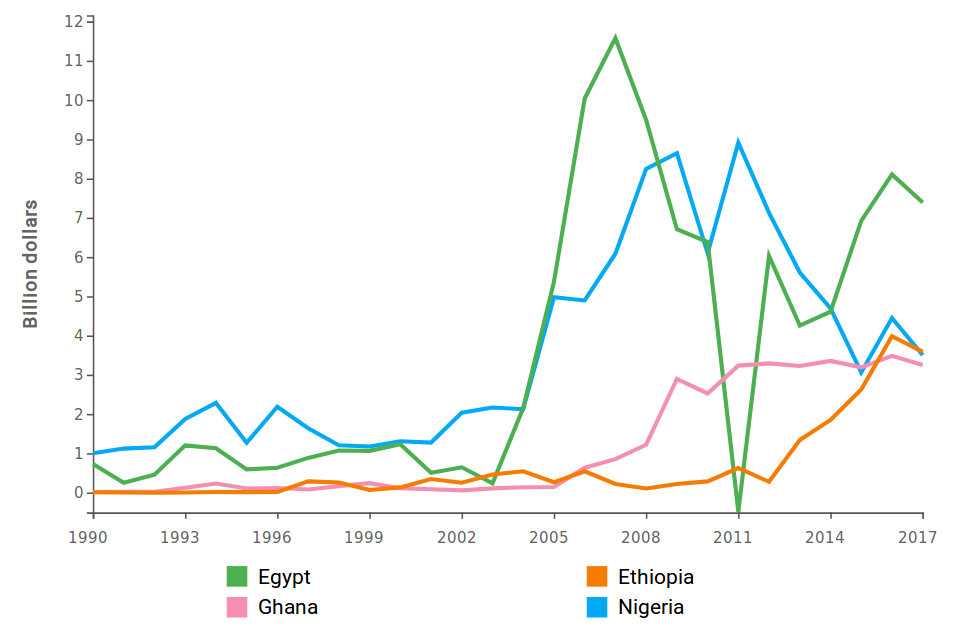 What about the EU?

Among the fastest-growing economies we cannot find EU countries, apart from a few rare exceptions. The bar chart below shows GDP growth rates at constant prices for the 20 largest EU economies, as forecasted by the IMF. 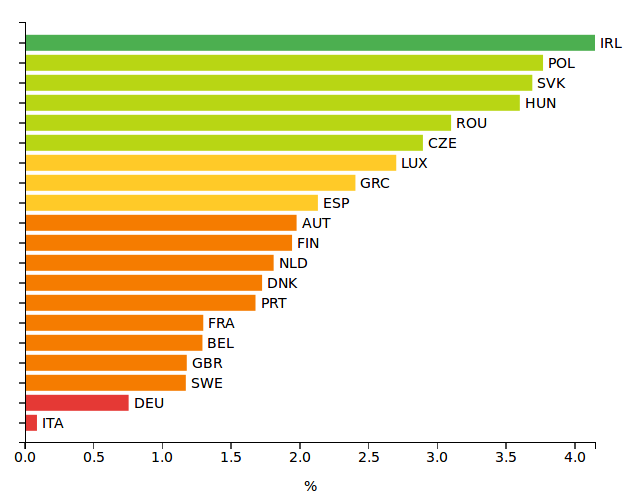 As you can see from the graph, GDP growth is expected to exceed 4% just for Ireland. In the Eastern part of the EU, Poland, Slovakia and Hungary are expected to exceed the 3.5% threshold, while the figure for Romania and Czech Republic is around 3%.
On the other hand, Western EU’s growth is expected to be slower compared to its Eastern counterpart: only Luxembourg, Spain and Greece are projected to grow by more than 2%, while the majority of Western EU countries are expected to grow by 1-2%. The IMF forecasts the slowest growth in the EU for Germany (+0.8%) and Italy (+0.1%).