The African Challenge: Exporting Products with a higher Added Value

The case of cashews for Ivory Coast and Benin

The African continent mainly exports raw materials which, by their nature, are characterized by a low added value. These raw materials are often exported from African countries to areas with a more advanced level of industrialization, in which they are transformed and re-exported as semi-finished or finished products. Through this transformation process, the same raw material, compared to its raw form, increases its added value. Recently, some steps in the direction of an industrialization process have been taken in certain areas of the continent: Algeria and Libya, for instance, have started exporting more petrochemistry and less crude oil.
For African countries exporting raw materials, following the footsteps of Algeria and Libya - i.e. increasing the added value of the raw materials, making them semi-finished or finished products - would therefore be a key opportunity, allowing for an upgrading of their industry.
In this context, an important export growth opportunity for the Ivory Coast is represented by the cashew industry.

The evolution of world trade

The graph shows the evolution of world trade in cashews (aggregate data of “Cashew in shell” and “Shelled cashews”), expressed in thousands of tons, between 1995 and 2018. The growing interest in dry fruit, in particular towards cashews, is part of a general trend of greater consumer attention towards healthy food. 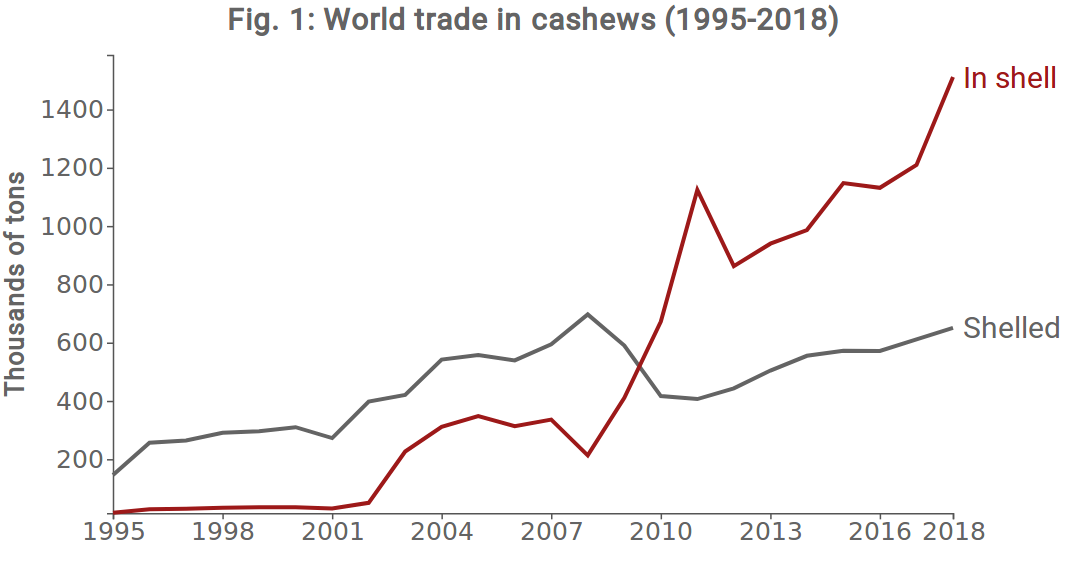 As can be seen in Fig. 1, the dynamics of international trade of in shell and shelled cashews showed a similar trend until 2007. After this year, international trade of in shell cashews showed a very strong growth, rising from 200 thousand tons in 2007 to 1 500 thousand tons in 2018. Shelled cashews have instead suffered a setback as regards exports in tonnes, while their average price over the years has increased, going from 4 in 2008 to 9.5 $/kg in 2018. 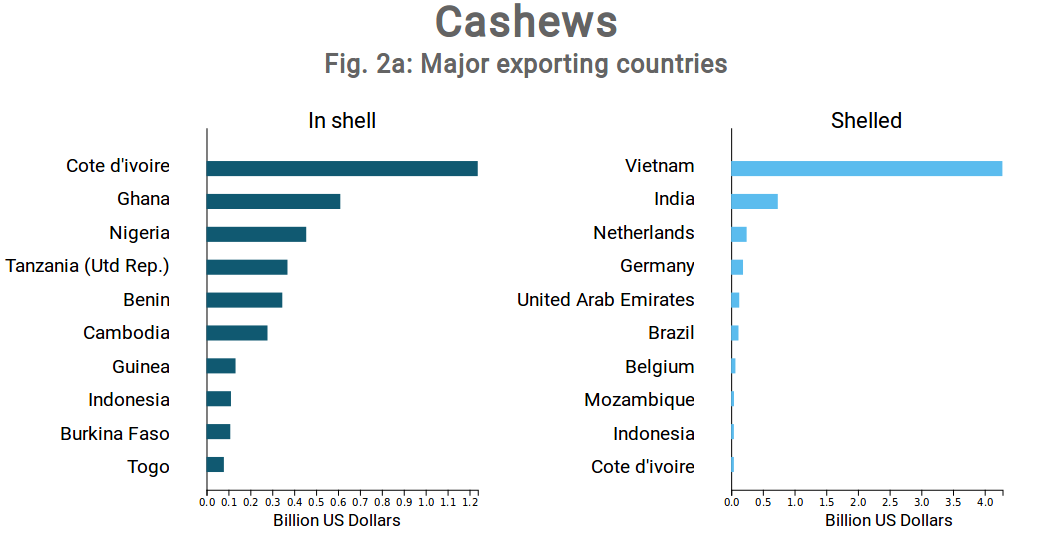 On top of in shell cashew exporters we find Ivory Coast ($1.2 billion), followed by Ghana ($0.65 billion), Nigeria ($0.5 billion), Tanzania ($0.4 billion) and Benin ($0.4 billion), which all belong to sub-Saharan Africa. As for shelled cashews, it is Vietnam ($4.3 billion) that leads the ranking, followed by India ($0.8 billion) and other countries that hold residual shares.
Looking at the Fig. 2b (Importers), we can infer that that Vietnam and India are in fact the only destination markets for cashew nuts with shell. In these two countries the processing - by shelling and selection - of raw cashews coming mainly from the countries of sub-Saharan Africa takes place.
In the cashew value chain, the raw product (with shell) is exported from African countries at 2.5-3 $/kg to Vietnam and India, countries where the transformation into semi-finished or finished product takes place. Vietnam and India export the processed product at 9.5-10 $/kg to the rest of the world, mainly the USA, China, Germany and Holland, where distribution and marketing phases take place, with a price paid by the final consumer equal to 25-30 $/kg.

Opportunities for exporting cashews for Ivory Coast and Benin

The following graph shows the dynamics of production and export (in thousands of tons) of cashew nuts from the Ivory Coast, the world's leading exporter of cashew nuts. As you can see, the country has greatly increased the production of the fruit especially in the last two decades, reaching a production of about 700k tons of cashews in 2017.


More than half of the Ivory Coast cashew production is exported - mainly to Vietnam - and, of this portion, over 90% consists of raw or lightly processed product with low added value: in shell cashews. Among the export destinations of shelled cashews are European countries, which buy this product from the Ivory Coast at a price of around 9.5-10 $/kg, therefore comparable to the price of the semi-finished product from Vietnam.
Recently, the Center for the promotion of imports from developing countries (CBI), a Dutch state body, has opened a call for proposals for the search of figures to assist the producers of cashew nuts in Côte d'Ivoire and Benin in the internationalization process. Specifically, an institutional consultant and a business export coach are seeken for each country. The resources will be involved in the creation of a connection network between the SMEs of the two African countries producing cashews and Europe, in order to to stimulate exports and encourage the development of the African economy.

The importance of the import acceleration phase: an ally against the crisis

Knowing the accelerating import phase of a product in a certain market is a significant growth driver, and an ally in combating downward economic trends [ Read all ]